So far, these are my observations about New Jersey:
1) It fucking sucks to drive here, GPS does not know about jughandles.
2) The thrift stores are pretty cool, and they are simultaneously much more and less organized than thrift stores in TX.

This weekend I hit up a few of the thrift stores near our apartment. I went to two Goodwills, another Goodwill that turned out to just be a distribution office, and some one-off (I think) called Village Thrift.

The first Goodwill we went to on Saturday is less than a mile from our apartment. It featured middle aged women in line buying candles because they smoke in their house (based not on conjecture but on the conversation they were having), and also a beat Dansk Kobenstyle pan. I was very tempted to buy it, because I have been on the lookout for old Dansk stuff forever, but the enamel really was pretty badly chipped. In any case I was very encouraged to find it in the first NJ thrift store I walked into, because I'm hoping that means that I will just stumble upon pristine Scandinavian enamelware left and right from now on.
We got this creamer with little atomic starbursts on it, made by Mayer China in PA. I don't think that it's worth a whole lot, but I like the white starbursts on the pale pink background. 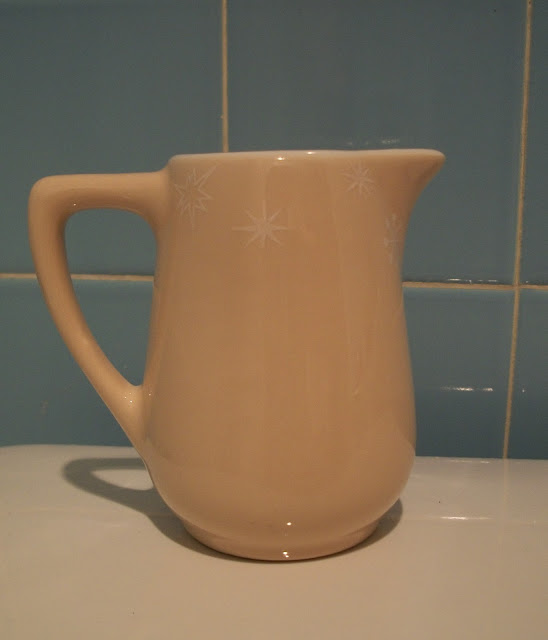 On Sunday I went to a different Goodwill. So far my observation is that Goodwills here are generally a little less organized, but they do bag sets of glasses, plates, etc together, so that makes things easy. Also, based on my limited sample size, they are much more poorly lit than the thrift stores I go to in Texas, which makes them look dingy and disorganized.
I picked up these two Corning coffee carafes which also feature an atomic starburst pattern, but these are gold. I think they're going to go on the Etsy store, once I get it set up. 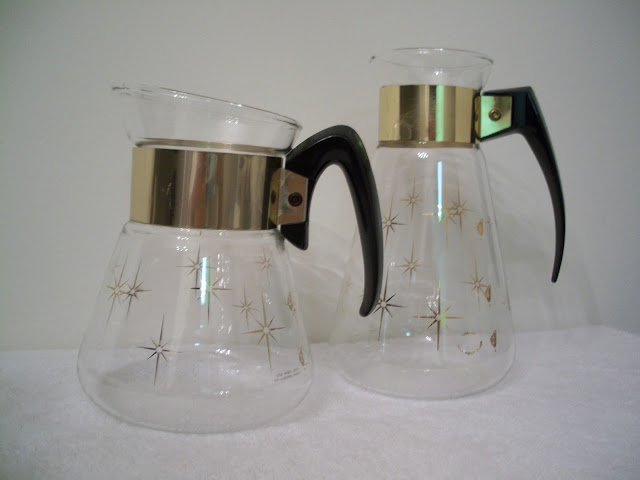 After an unsuccessful attempt to go to another Goodwill that was not, in fact, a retail location, and having to turn around like 47 times, I went to Village Thrift in north Camden. This place is quite something. First of all, it is next to a gigantic English Pub that may or may not sort of be a club, judging by the size of their building. It was probably a bank or something in the 50s or 60s, and has some funny modern detailing, but they have all these old English crests stuck all over the building in an attempt to make it look oldy-tymey. I think the aesthetic they were going for might be renaissance faire meets British mod? Not successful. 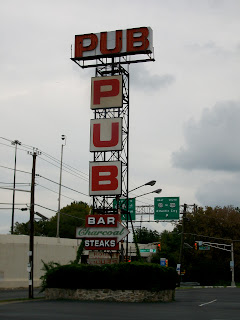 At some point I need to go back and take pictures of the actual building, but I didn't really feel like getting out of my car to get a decent angle, and besides it was overcast.

Then village thrift has quite a building in its own right. The whole awning is covered in rotting wood shingles, and I kind of wondered what I was getting myself into. The inside was the most organized of any thrift store I've ever been in. Like, I don't know who has the time and the OCD to organize 1 million toys into little bags and hang them from retail-style racks. I found myself getting annoyed by how organized it was.
They don't really have a furniture section, but they do have a pretty big kitchen/ home stuff section.
Where I found....More Early American Pyrex! 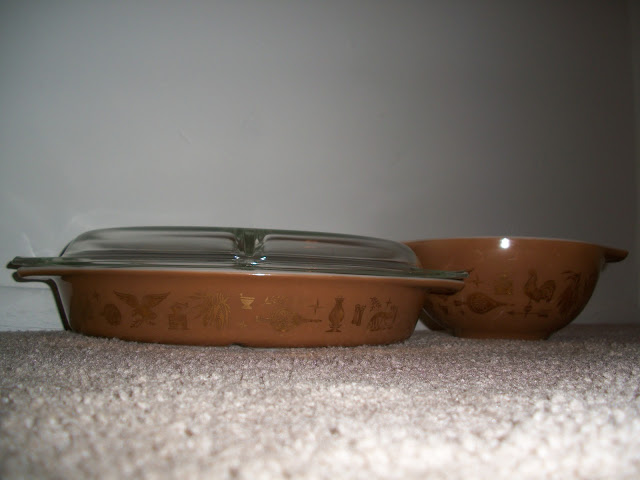 Actually just the bowl. The divided serving dish was from the Goodwill. I have never seen any of this pattern in a thrift store, and I got two in one day! So exciting! The bowl is a little beat, but the covered dish is IMACULATE. Yay.
I also almost bought a J. Crew corduroy pencil skirt, but then I remembered that I don't buy clothes from thrift stores because I am scared of bedbugs.
at 6:00 PM